Your one-stop travel plan with all the info you need

Add this and other places to your personal travel plan. We will then help you with further suitable suggestions: free of charge and fast!

It is France’s pride and joy and one of the most famous places of worship in the world: Notre Dame Cathedral. It is by far the most visited sight in Paris – or: at least it was until the devastating fire in 2019. In our article you will get a lot of information about the history of the cathedral, interesting facts and figures – as well as information about the reconstruction of the church.

Your vacation to Paris is coming up? Then check out these articles as well:

April 15, 2019 was a painful day for many Parisians: the beloved Notre Dame Cathedral in the heart of the metropolis went up in flames during construction work.

Before the severe fire, Notre Dame was by far the most visited sight in Paris – far ahead of the Eiffel Tower, Louvre and Sacré-Coeur. More than 30,000 people visited the church each day or climbed the towers to enjoy the magnificent view from the Île de la cité. Unfortunately, this will not be possible for a long time. 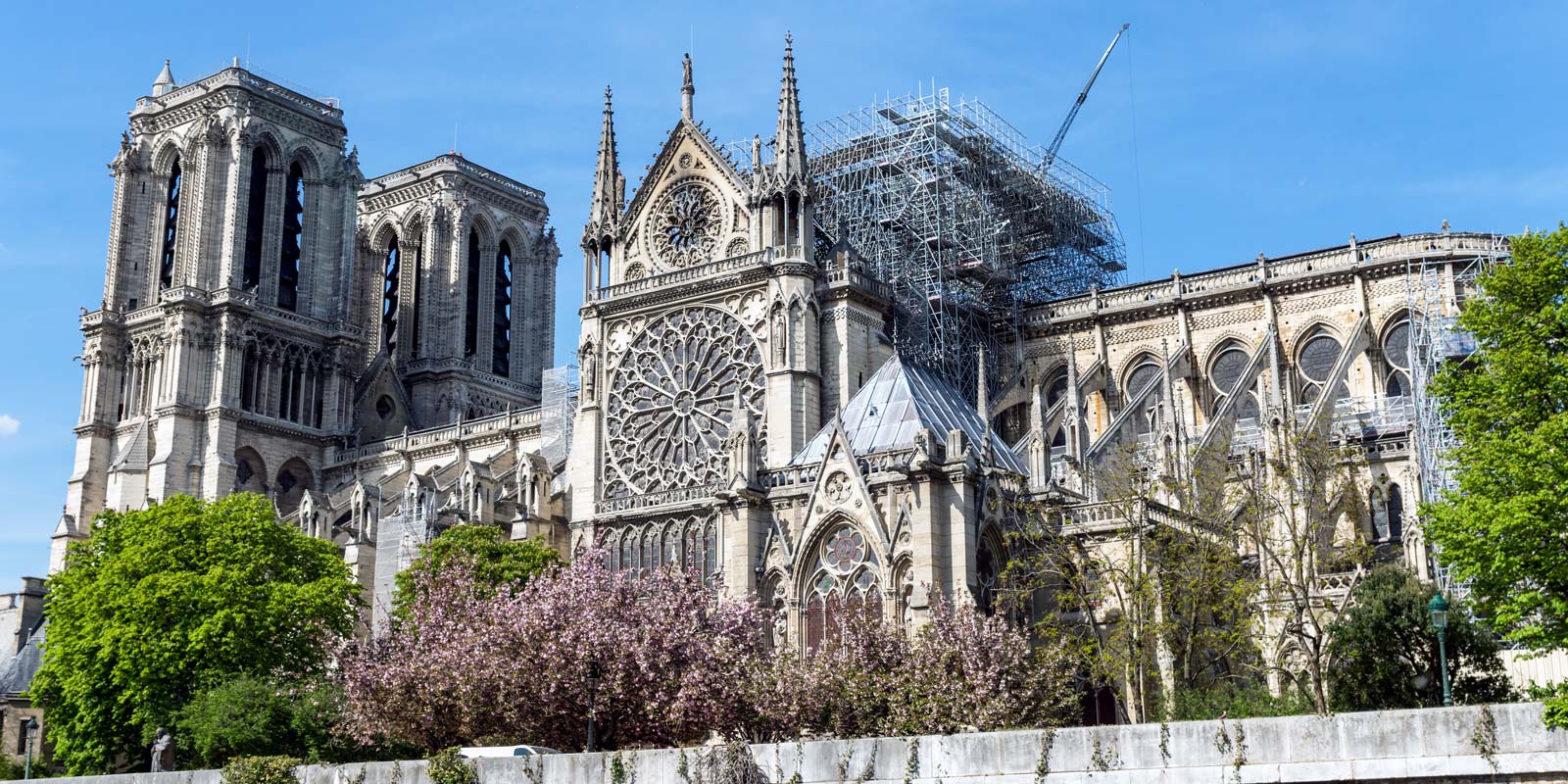 Now that the remains of the fire have been cleaned up, it is at least possible to visit the forecourt again. During a Walking tour of the city island you can catch a glimpse of the cathedral from different angles and see the progress of the work. I really didn’t expect the walking tour to be so interesting, but I really recommend it to you.

Also a great view you have of course from one of the numerous Seine excursion boats.

The best way to get to the cathedral is by metro – line 4 to be precise. The closest stops to Notre Dame are Saint-Michel Notre Dame or Cité.

Notre Dame burns: cause and reconstruction

The Parisian landmark should shine in new splendor in 2022 – that was the idea behind the elaborate and long overdue renovation work on Notre Dame, which began in April 2019. But the scaffolding was only up for a few days when the disaster happened. Presumably due to a short circuit, a fire was started that spread at breakneck speed. The 1300 oak beams of the roof beams went up in flames, the enormous heat melted the lead roofing. Finally, the roof collapsed along with the clock tower.

Even though the fire was extinguished and the characteristic shape of the facade was preserved, the damage is immense: the interior has been severely damaged by the falling beams and, above all, the melted lead. Numerous works of art of inestimable value remain, but need to be fundamentally restored. In addition, the damage left by the tons of extinguishing water in the extremely absorbent limestone cannot yet be estimated.

About 1300 oak beams went up in flames during the fire.

The day after the fire, France’s President Macron promised that the cathedral would be completely rebuilt by the time of the Olympic Games in Paris in 2024 – a more than ambitious goal for experts. In any case, the work is in full swing. Whether the roof with the spire will be faithfully restored or whether there will be a modern interpretation, e.g. made of glass, is still to be decided.

Due to the severe damage caused by the fire, Paris‘ most visited landmarks will remain closed for the next few years. Notre Dame will reopen its doors to visitors in 2024 at the earliest. Until then, you can only admire the still majestic building from the outside. I highly recommend a Walking Tour around the Cathedral.

Notre Dame in facts and figures 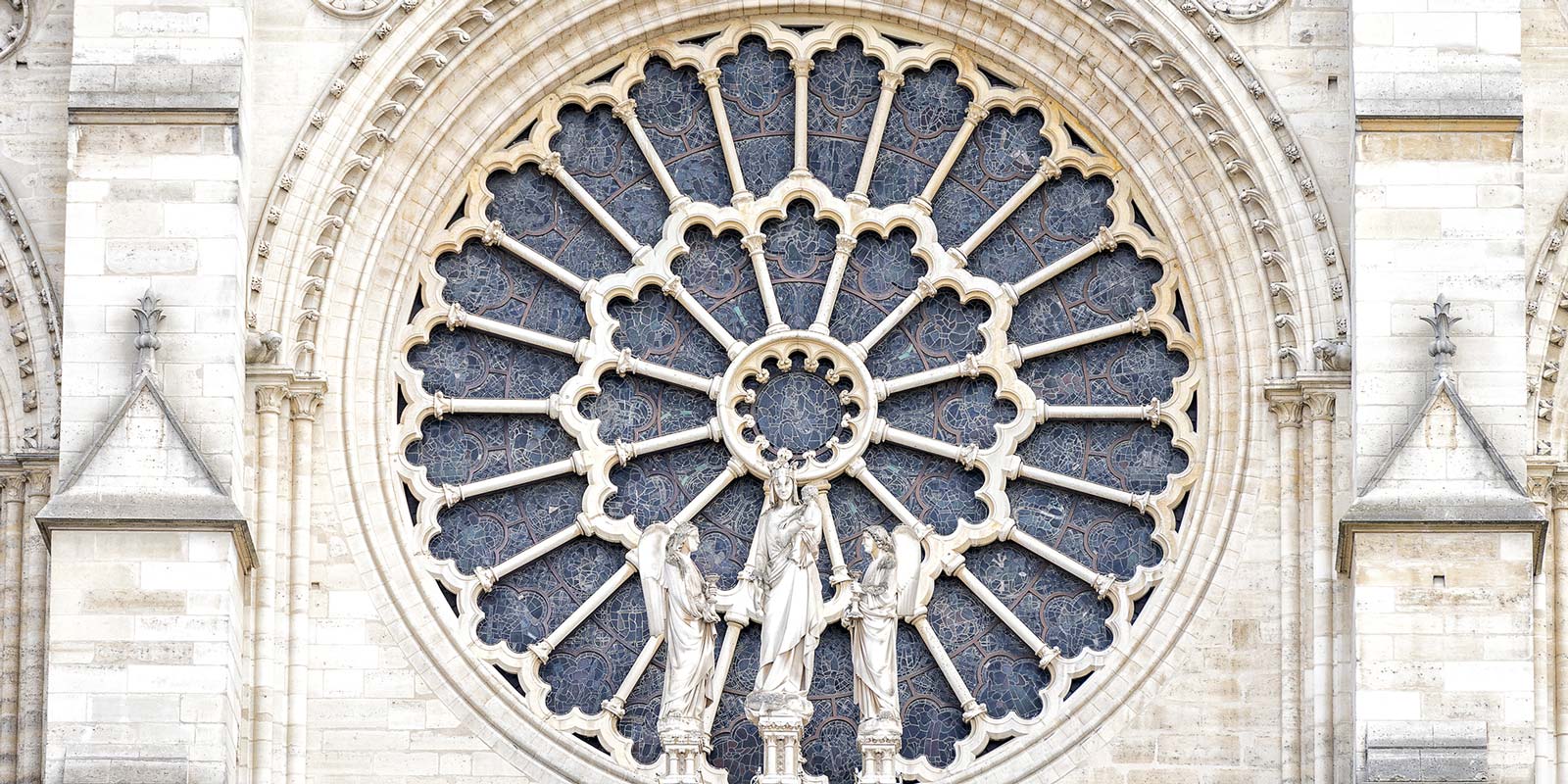 Notre Dame is considered the last great early Gothic cathedral built in France. Especially the first stages of construction are still strongly influenced by the Romanesque style. Characteristic of Notre Dame, besides the two stone towers and the three large window roses, are above all the buttressing reaching from the facade to the roof and the numerous grotesque gargoyles.

The foundation stone of the majestic cathedral was laid in 1163 under the Parisian bishop Maurice de Sully. About 80 years later, the two towers were completed; however, further construction lasted well into the 14th century. It is dedicated to the Blessed Virgin Mary.

In 1793, revolutionaries stormed the church and severely looted and devastated it. Although Notre Dame escaped the fate of many churches and monasteries that were demolished – but the church was “desecrated” and declared a so-called temple of reason. In fact, it became a wine depot for the following years.

In 1804, Napoleon crowned himself emperor at Notre Dame. The famous picture of this bizarre ceremony you can admire in the Louvre!

Even the fact that Napoleon Bonaparte allowed the use of Notre Dame for religious ceremonies again from 1802 – also in order to crown himself emperor here two years later – could not stop the creeping decay of the church. This was only achieved with the appearance of a very special novel known throughout the world: The Hunchback of Notre Dame.

The Hunchback of Notre Dame

For many, the name Notre Dame is inseparable from the story of the “Hunchback of Notre Dame”. Victor Hugo’s novella, published in 1831, has been made into numerous films since the mid-20th century. The best known of these is probably Disney’s animated version from 1996. Like most film adaptations of the novel, it revolves around the hunchbacked hunchback Quasimodo, who falls madly in love with the beautiful Esmeralda.

Victor Hugo’s original wire is not about the bell-ringer at all, but mainly about the church itself: His work is also simply called “Notre Dame de Paris”.

Especially worth mentioning: We have Hugo to thank for the fact that Notre Dame has remained with us to this day! For after the French Revolution, there was no great interest in preserving the place of worship. But the novel provided a new appreciation for the beauty of the church – and so in 1844, a good 13 years after the novel’s publication, elaborate restoration work began.

Your vacation to Paris is coming up? Then check out these articles as well:

About the author
Steffen

I am an absolute travel enthusiast with a great love for the USA, Spain and Italy. And England. And France. You can find lots of travel inspiration from me regularly on our YouTube-channel .

This is the address

6 Parvis Notre-Dame - Pl. Jean-Paul II, Paris
How did you like this article?
Loving Travel