Anyone who has devoured Dan Brown’s bestseller “Illuminati” will be familiar with Castel Sant’Angelo in Rome as the lair of the secret organization. The two-thousand-year-old fort is not quite as spectacular today, but the history of the building is nevertheless eventful – and a visit is worthwhile.

The year is 590 A.D.: Rome is hit by a severe plague epidemic. The citizens are in despair, including the then Pope Gregory I. One evening he prays in front of the mausoleum of Emperor Hadrian – over which the Archangel Michael then appears to him. Only a little later, the plague releases Rome from its stranglehold. This fort on the Tiber, built as early as 130 A.D. under Hadrian as a family burial place, became the “Castel Sant Angelo” – the Castle of the Angels– after this miracle.

However, the secrets and highlights of the castle remain largely hidden from “normal” visitors – because the papal chambers and the actual mausoleum of Emperor Hadrian, which is hidden deep in the heart of the fortress, can only be reached with a qualified guide. But this is not a problem, because the offer is large!

With many providers, the tour guide is already waiting for his group in front of the castle – this also guarantees a quick and uncomplicated entry. However, one downer remains: the Passetto di Borgo has been closed to visitors for a long time. If and when it will be accessible again, there is no exact information and statements. Too bad!

BOOK A TOUR OF THE ANGEL BUG

The best view of the castle is of course from the Angel Bridge! The magnificent angel statues in Baroque style were designed by none other than Gian Lorenzo Bernini – the great master, who shaped Rome with his style like no other.

The Angel Bridge is not only a popular photo motif, but also a sought-after place for marriage proposals.

For those who prefer the eerie to the romantic, and after the “real” story of Castel Sant’Angelo, would like to delve deeper into the world of Dan Brown, a guided “Illuminati” tour is highly recommended! Here, participants visit mystical cathedrals and hidden corners – just like Robert Langdon on his scavenger hunt through the eternal city.

To make your visit to Castel Sant’Angelo a success, here is a brief summary of the most important information.

Tickets and prices for Castel Sant’Angelo in Rome

The entrance fee for Castel Sant’Angelo is about 15 euros. EU citizens up to the age of 25 pay half price, and young people under the age of 18 receive free admission. Those who opt for online advance tickets to enjoy priority admission – which is especially worthwhile in high season – must expect to pay about 5 euros extra. Guided tours start at around 60 euros.

No matter which ticket you have: The great, free app that guides you through the exhibitions can be used by every visitor thanks to free wifi!

BOOK TICKETS FOR THE TOUR

The Castel Sant’Angelo is open daily from 9 am to 7 pm. Only on January 1 and December 25 it remains closed.

Like all the major sights of Rome, Castel Sant’Angelo is very centrally located and can be easily reached on foot. It is located on the “other” side of the Tiber, just a few steps from the Vatican and can be easily combined with a visit there.

A mausoleum for the emperor 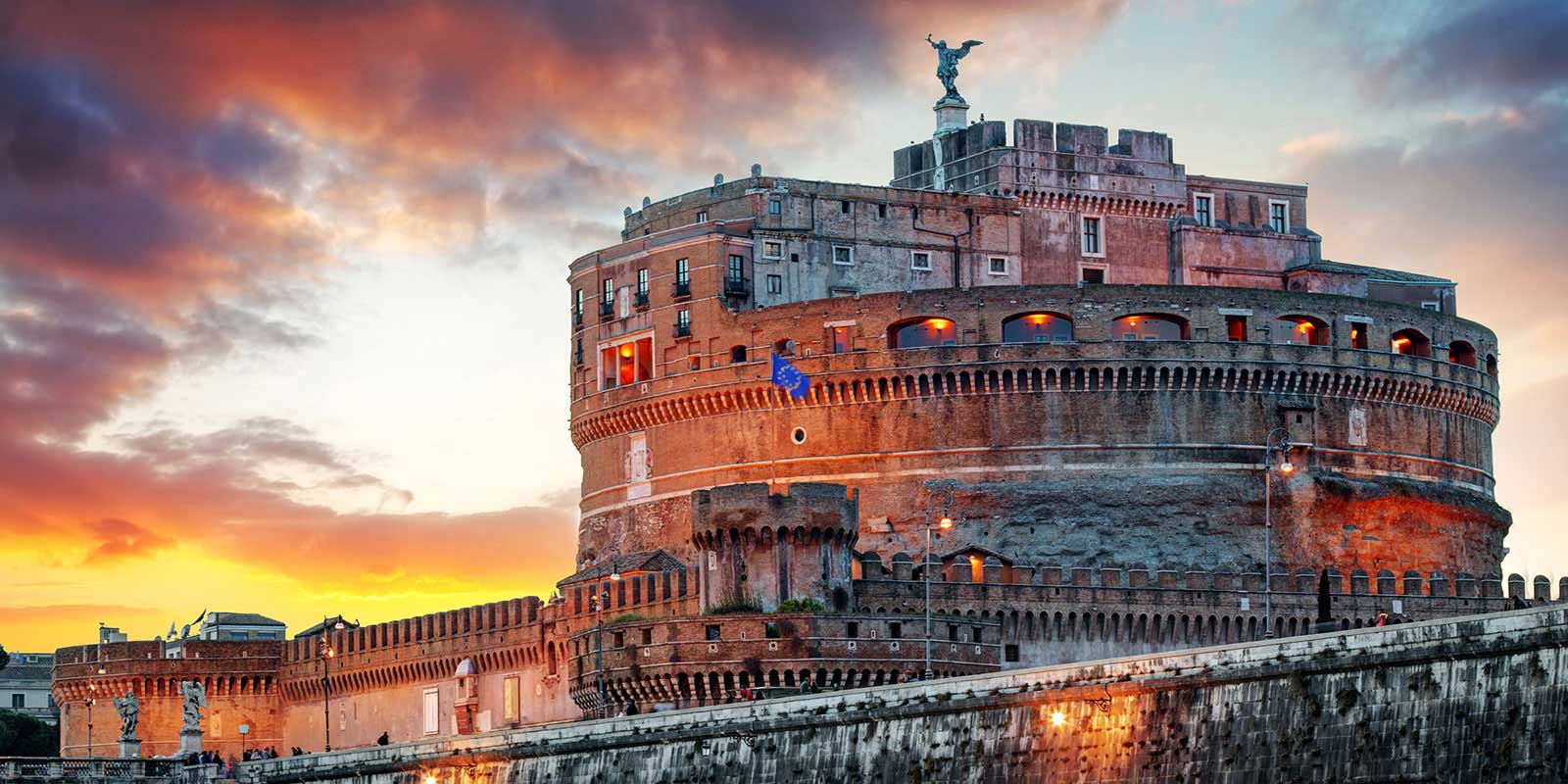 Emperor Hadrian wanted an imposing final resting place for himself, his wife and his successors. This is where the original name of the building comes from: Hadrianeum. At the same time began the construction of the Pons Aelius (today simply Angel’s Bridge), which was to connect the resting place across the Tiber with the Field of Mars. In 139 A.D., a year after Hadrian’s death, the mausoleum was completed. Already at the beginning of the 3rd century, however, Caracalla, the last Roman emperor, was buried here. Under Emperor Aurelius, the building was finally converted into a defense tower.

Castel Sant’Angelo in Rome and the church

From today’s perspective, it is almost surprising that the castle continued to be used as a citadel for well over 300 years after a “miracle” of such magnitude. Only in the 10th century the fortress finally passed into the possession of the Catholic Church.

The popes of the time set up sumptuous chambers in Castel Sant’Angelo, where they knew they would have a safe haven in times of crisis. Also, the secret passage to the Vatican described by Dan Brown, more than 800 meters long, named Passetto di Borgo It was created in 1277 under Pope Nicholas III – and proved useful several times throughout history. This was also the case for Pope Pius VII, who used it to flee from Napoleon Bonaparte’s troops.

The secret passage of the popes still exists today!

But the castle is also marked by far scarier parts of its history. Thus, it was also used as a prison, including during the Inquisition. Then, in 1906, Castel Sant’Angelo found its current purpose – and became one of the most important museums of Rome.

Castel Sant’Angelo as a museum

The comprehensive exhibition presents the impressive history of the building in a tour through more than 50 rooms. Along the battlements, visitors walk the paths that once the soldiers walked in defense of the castle. In the courtyard you can admire the original marble image of St. Michael the Archangel, which once adorned the roof of the castle – but it was replaced with a bronze version in the 17th century.

Numerous exhibits tell about the not only changeful, but also fortified history of the Engelsburg: So there are mainly armors, weapons and more to see. More conciliatory is the highlight of the tour: the roof terrace with a spectacular view of the city – especially towards the Vatican with St. Peter’s Basilica.

Don’t miss the chance to visit the little café at the top of the castle!

About the author
Steffen

I am an absolute travel enthusiast with a great love for the USA, Spain and Italy. And England. And France. You can find lots of travel inspiration from me regularly on our YouTube-channel .

This spot belongs to

Explore district
How did you like this article?
Loving Travel